In a quiet room, in an old bungalow in a mountain town, I align my arms and present them to a man named Noy. I present my arms to him and he tells me “Gala ka kasi,“ (You wander, that’s why).

He tugs at my fingers and shows me. My arms are not aligned. It could be my posture, or the way I stand. It could be that the human body is asymmetrical at best, but he tugs again.

Then, he holds my head in place with one hand and massages the front of my shoulder with the other.

The pain is spectacular. It’s like a spaceship exploding in space.

He says “Say your name to cast it out!” Gesturing towards the door, he tells me. “Sige! Shout it out.”

The two Belgian kids with me are watching in horrified fascination. I say my name, and flick my arms towards the door. My cousins, two boys who are also watching, waiting their turns, are laughing at me.

Noy measures my arms again. “Gone.” He says, satisfied. “Next!” He slaps my upper arm and I’m off on my merry way. I’m covered in oil and I feel like I’ve been in a fight, but I feel better. The pain that’s been nagging at me is gone.

Wandering Gets You in Trouble

Gala means to wander aimlessly, but there’s a connotation that implies that you, as a wanderer, are the one who is aimless, and not the path you take. Gala is treading where you shouldn’t tread, stepping off well-worn forest paths into the actual forest, which is far deadlier.

Filipino animist belief is rife with spirits, dwarves (known as dwendes), cryptids like the Tikbalang and beautiful benevolent fairies known as diwatas. They love to bless you or play tricks on you, especially if you help them, or offend them.

For example, it is said Mount Pulag, the highest peak in Northern Luzon, is guarded by a tikbalang, who will go after you if you litter. By go after you, it means he (Tikbalangs are usually dudes), shows up in your dreams and shouts at you.

In many cultures, crossing paths with beings brings luck. The kind of luck they bring to you really depends on the mood of the being, and the disposition of the wanderer. In many cases, they aren’t evil per se, but mischievous. They adhere to the rules of fairytales. Keep Neil Gaiman’s Instructions in mind or you can end up possessed, riddled with boils or lost forever in the land beyond.

Wandering can cause you pain

Noy says the pain in my body — my bad shoulder, the bad sleep, the weight I gained, all come from my habit of wandering. “You disturbed them, and they disturb you back.”

He pauses. “You are prone to this, being followed by spirits.”

He’s not the first one to say so. As a child, a hilot (healer) used to come by our apartment in Makati. She would say the same thing – spirits follow you, they dwell in you, they are attracted to you.

She would always start sessions with a divination, a way to figure out if there was a spirit near me, or around me.

She would give a painful massage with her scented oils (the one she preferred was sticky, and  left stains on my green bedspread). She would drip candle wax into a bowl of still water and look at what formed to — “Ah, this dwende is following you.” The water would trap the spirit, and she would slip the bowl under my bed to finish the job.

It was a weird, and also strange way to explain why people fall sick or have pain. They like you, so they make your life painful.

The second culprit of pain is the cold in your veins – known as lamig. Lamig was responsible for the cracking, popping sounds that come when a hilot adjusts your body.

Gala makes you sick — so they say

It sounds like nonsense. I never really thought so, but like most Filipinos, I thought it was just something people believed in. Then, in my final year of high school (this was in 2002) I became ill. I had migraines that lasted for months. I’m not talking about the occasional migraines here and there. I’m talking about a forever migraine, an octopus of a headache that stayed with me forever. I woke up with it, ate with it, went on vacations with it throbbing in the background.

The neurologist called it status migronosus  – a forever headache. I was on anti-epileptic drugs, Xanor, Naprelan, every painkiller I could get my hands on. We couldn’t figure out what caused it.

The drugs weren’t working, and my mother decided to try alternative medicine. Acupuncture, chiropractors, diet changes, meditation. These sessions persisted until my first year of college.

One weekend, a year or so after the migraines started, we drove to a small house in La Trinidad, Benguet. La Trinidad is a valley nestled right in the middle of the mountains like someone jammed a bowl into sand. The mountains rise up beside it, and all you see are fields, and skies, and houses perched precariously on the mountainside like all these people decided to take off all their hats at once and strew them about. The town is cut through by long straight highway flanked and the best public market where the trucks stop after ambling down from the mountains.

Ambling being the right word, since these trucks were spectacularly slow, and overloaded with vegetables, or manure, chickens or pigs from the mountains that span the northern tip of the Philippines. We meandered our way to a small house, in a side street, with chickens in the yard and a laundry line strung up with freshly washed clothes.

The interior of the house was full of statues of saints, and candles that flickered. The hilot this time was a big woman, and we waited quietly, sitting on monobloc chairs, me dozing fitfully since my medication turned me into an almost narcoleptic. 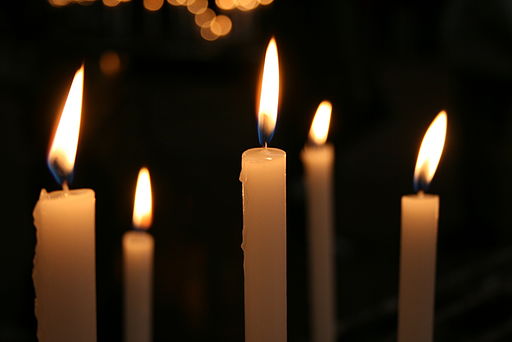 She looked at me, running her thumb over my temple. “It’s someone in your family. Someone has bad intentions towards your family, and she is paying for it.” She was talking to my mother.

Instead of pressing on my back, she pressed on my pectoral muscle, above my heart. The pain blinded me. The only time I ever felt that much pain was falling off a skateboard and slamming the back of my head into the pavement.

She massaged me for fifteen minutes. “No payments,” she told my mom. “Buy a candle for the saint, light it and pray.”

On the way home, I told my mom. “The pain went away, for just a minute.” It was the first time I had been pain-free in a year.

Two sessions later, my migraines were gone. They’ve largely stayed gone, over the years. Occasionally, I will get a blinding migraine and be unable to go to work. Once every few months is better, compared to everyday, and always.

I’m still gala. I still wander into places I shouldn’t. There’s a part of me that still thinks it’s an old wives tale. But when I feel sick, or my body is in pain, I still call a hilot, or a healer before taking a pill.

Follow my blog if you want more weird and fascinating kwentos about Filipino life and other things that interest me! Hit that like button or subscribe to me via email!